If the Trump Administration had its way, Americans would be completely unaware that the 2020 ACA enrollment period began on Friday, November 1. Enter Peter Morley. 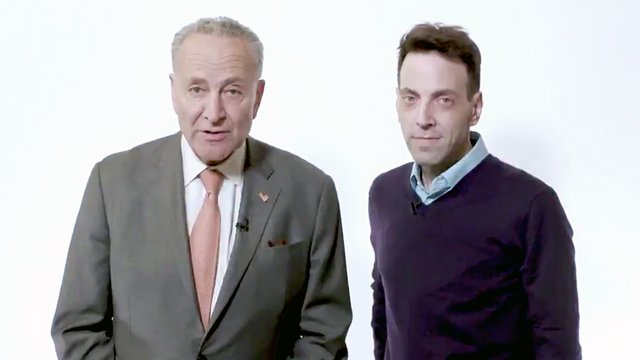 To counteract Trump’s efforts to sabotage the Affordable Care Act, Morley (right) has teamed up with almost half the Democratic Senators, including Chuck Schumer of New York (left), to create an informational video about the 2020 Open Enrollment period from November 1st to December 15.

If the Trump Administration had its way, Americans would be completely unaware that the 2020 ACA (Affordable Care Act) Open Enrollment period began on Friday, November 1.

Enter Peter Morley, a revolutionary health care activist who wakes up every morning fighting to save people’s lives, as well as his own. Morley is a two-time cancer survivor who lives with the autoimmune disease Systemic Lupus Erythematosus. To counteract Trump’s efforts to sabotage the ACA, Morley has teamed up with almost half the Democratic Senators, including Chuck Schumer of New York and Patty Murray of Washington, to create an informational video about the 2020 Open Enrollment period, from November 1 to December 15.

In the past few years, Morley’s commitment to defend health care has compelled him to travel to Washington, D.C. twenty-five times, and to visit more than 350 Congressional offices. He has testified in front of the House of Representatives twice. Additionally, he has recorded more than fifty videos with Senators and Representatives to raise awareness about health care. Morley has become such a fixture in the nation’s capital that California Representative Eric Swalwell dubbed him “the 436th member of Congress.”

Watching Peter Morley in action on the Hill and on Twitter, one would think he has worked in politics his whole life. However, his path to health care advocacy began only three years ago.

“Before the 2016 presidential election, voting was my only form of activism and I was always private about my health struggles,” Morley explains over coffee at his local New York City cafe. He’s accompanied by his dog Natasha, a Twitter star in her own right. “As someone who survives on government subsidies, I realized I had to speak out once Trump, who promised to repeal health care, was elected,” he says.

“The ACA has meant focusing on healing not bankruptcy.”

In 1997, Morley suffered an accident during a lapse in health care coverage for all medications and doctor visits out of pocket. When his injuries later required surgery, his insurance company considered them pre-existing conditions, denying all his claims and leaving him with a financial burden of tens of thousands of dollars. In 2011, he survived kidney cancer. In 2013, he was diagnosed with lupus. Today, Morley manages more than ten pre-existing conditions, takes thirty-eight medications, and receives twelve biologic infusions to slow the progression of his disorders. Thanks to the ACA, he is supported by a team of doctors who manage this complicated regime of care, and although “on the brink of financial ruin,” he told Congress in July, “the ACA has meant focusing on healing not bankruptcy.”

When Donald J. Trump was elected President in 2016, Morley, like millions of other Americans, was terrified about losing his coverage. So he began broadening his political involvement. “I got my feet wet by calling various members of Congress to not vote for certain appointments,” he remembers. “At first it felt daunting, but I soon realized how easy it was to call and voice your opinion.”

Around the same time, Morley launched his Twitter account, which now has close to 70,000 followers and has become a go-to source for health care news. His first followers were fellow sufferers of chronic illnesses. In 2017, when he shared a photo of himself before undergoing cancer surgery, he wondered, “Am I exploiting myself?” But over time he realized it was essential that he share his own story—including the pain he experiences—as an essential component of his work to protect the Affordable Care Act.

In July 2017, as the Senate prepared to vote on the Restoring Americans’ Healthcare Freedom Reconciliation Act of 2015, a bill to repeal the ACA, Morley felt helpless. He asked some friends whether he should “go down to D.C.” Most felt it would be a waste of time. 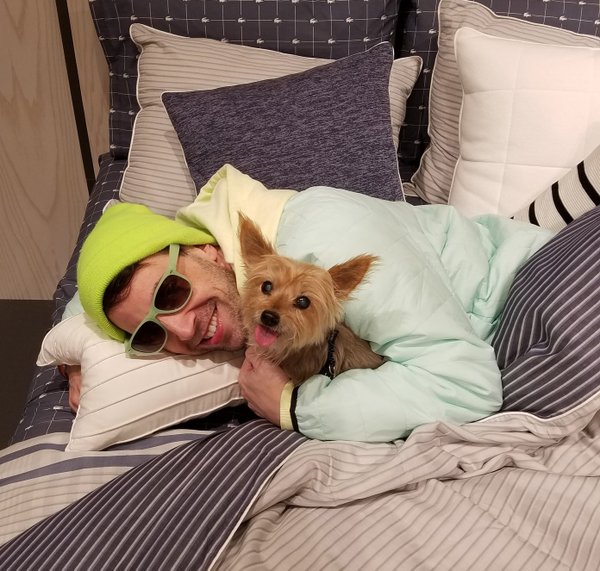 Morley and his dog Natasha.

Then, his friend and civil rights attorney Adam Fernandez offered to meet Morley at Union Station and walk him around to the different Senate offices. With that encouragement, Morley thought, “How can I not do this? He wanted to feel “like I did everything in my power to make a difference.”

That visit to Washington, Morley’s first, taught him valuable lessons about being persistent and nonpartisan, he says. He visited at least thirty different offices sharing his story, usually with staff.

After being turned away three times, Morley was finally invited into the office of John McCain, the late Senator from Arizona. McCain’s home state of Arizona was among the few GOP-led states that had expanded Medicaid to cover low-income, childless adults. He spoke to McCain’s legislative staffer about his experience with lupus and how the ACA was keeping him alive.

As it turned out, this particular staffer’s best friend also had lupus, which led to an emotional conversation. The experience cemented Morley’s convictions about the importance of bringing human stories to the health care debate.

“If we don’t speak up, then they don’t know these issues matter to us.”

With the Senate continuing to debate the repeal bill, Morley boarded his Amtrak train back to New York City. In the middle of the night, McCain, motivated by how the legislation would hurt his constituents, gave his dramatic thumbs down vote that stopped the bill in its tracks.

With that success behind him, Morley decided to be more proactive about protecting health care, including the ACA’s coverage of pre-existing conditions. Morley’s followers started writing to him about their own health care struggles as well as their fears about losing coverage: “Residents of Kentucky, South Carolina, Colorado, they wanted me to share their stories with their respective representatives,” he says.

“I had stories from people who suffered from lupus or cancer, who had to travel hundreds of miles just to have their life-saving treatments. Personal accounts from parents with medically suffering children who relied on coverage to stay alive,” Morley tells me. Since then, he has traveled to Washington, D.C., once a month to advocate for all those who will lose their health care if the ACA is dismantled.

Morley’s advocacy was further amplified in 2019, when he was invited to testify twice in the House of Representatives as a patient and witness to the attempted sabotage of the ACA by the Trump Administration. In response to Morley’s testimony, Cummings said, “I often say to our witnesses who have come here to share your personal stories, thank you . . . for taking your pain, turning it into a passion to do your purpose. Pain. Passion Purpose.”

According to an April 2019 Gallup poll, 55 percent of Americans worry “a great deal” about health care, topping a list of fifteen issues. An October 2019 CBS Poll found “more than four in ten Americans are dissatisfied with their health care costs and say affording basic medical care is a hardship.”

It’s findings like these, along with the personal stories, that fuel Morley’s daily mission.

“I’ve learned that health care is not sexy enough to talk about on a daily basis,” Morley says. “The only time it trends is when something major happens.” So he brings the human element to the debate. He engages followers with his day-to-day posts about living with chronic illness, and shares the stories of others as well.

Morley’s twenty-sixth visit to Washington, D.C., scheduled for November 18th, will be for the second annual United States of Care convening. On the agenda is sure to include the looming threat of a lawsuit, Texas v. United States, now being reviewed by a three-judge panel. Initially filed in February 2018 by twenty Republican state attorneys general and Republican governors, the case challenges the individual mandate and, if decided in their favor, would invalidate the entire ACA.

Morley, as always, has a plan to fight back. As he puts it, “If we don’t speak up, then they don’t know these issues matter to us.”

When Peter Morley, who has an autoimmune disease, was out and about on the streets of New York City for Pride Month celebrations in June, he wore a mask -- as well as a matching outfit with his best friend, Charlie. Their matching outfits caught the attention of a photographer, and when the two posed, Morley said the photographer asked him to pull his mask down. After Morley declined, the photographer responded by saying, "COVID is over. Get on with your life."

When you cope with severe medical conditions, as I and millions of Americans do, the person who sits in the Oval Office is more than just a trivial matter — the president’s decisions are a matter of life and death.

My 25th Trip to DC to #ProtectOurCare

By Peter MorleyDemCastUSA.com My 25th Trip to DC to #ProtectOurCare was specifically to help bring awareness to ACA Open Enrollment, which begins November 1, 2019 (October 15 for California). I wanted to document my meetings & how YOUR Read more…